DeepMind researchers claimed state-of-the-art results in the Arcade Learning Environment in their recent ICML paper “A Distributional Perspective on Reinforcement Learning”. They investigate a distributional perspective of the value function in the reinforcement learning context and further design an algorithm applying Bellman’s equation to approximately learn value distributions, which results in better policy optimization. The discussion in their paper follows closely the classical analysis of Bellman operator and dynamic programming, which should be familiar to most AI researchers.

In this article, I will introduce the mathematical background of the classical analysis of reinforcement learning, that is, the Bellman operator is essentially a contraction mapping on a complete metric space, and explain how value-based reinforcement learning, e.g. Q-learning, finds the optimal policy. Based on these general ideas, readers will see how straightforward the idea that the DeepMind paper comes up with, and hopefully draw some inspiration from this topological perspective to design future RL algorithms.

For the reader who prefers to systematically learn from books, I strongly recommend you to read the textbook Linear Operator Theory in Engineering and Science for acquiring mathematical background, and the book Abstract Dynamic Programming by Dimitri P. Bertsekas to study the connection between contraction mapping and dynamic programming. If you don’t remember Markov decision processes or policy optimization in reinforcement learning, my previous blog has introduced them briefly.

Literally, the word “topology” means “the study of spatial properties”. The space here could be any abstract space with certain properties. A natural way for us to quickly start the discussion is to observe a metric space.

When we construct a metric space \((X, d)\), it is common to expect our metric space has no “point missing” from it. For example, the space \(\mathbb Q\) of rational numbers, with the metric by the absolute value \(|\cdot|\) of the difference, is not complete. Just consider the rational sequence \(x_{n+1} = \frac{x_n}{2} + \frac{1}{x_n}\), \(x_1 = 1\), whose elements become arbitrarily close to each other as the sequence progresses, but it doesn’t converge to any point in space \(\mathbb Q\). Therefore, the space \(\mathbb Q\) is incomplete, since it obviously misses points. 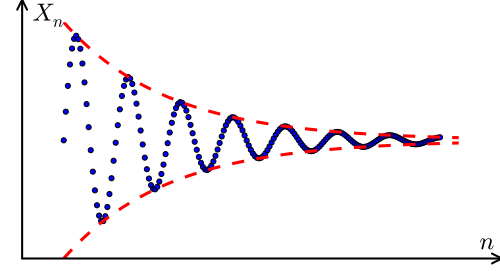 Definition 3. (Complete Metric Space) A metric space is said to be complete if each Cauchy sequence is a convergent sequence in it.

Now we introduce the contraction mapping based on the concept of completeness.

The reason that contractions play an important role in dynamic programming problems lies in the following Banach fixed-point theorem.

Proposition 1. Suppose the contraction assumption is satisfied. Then \(\mathcal T\) is also a contraction with the same Lipschitz coefficient \(\gamma\).

If we can show the reverse inequality, \(v^* \geq v_{\mathtt{opt}}\) , then we conclude \(v^* = v_{\mathtt{opt}}\). However, it does not always hold true. A sufficient condition, monotonicity property, is therefore introduced to make them identical.

Reinforcement learning (RL) approximates the optimal policy of a Markov decision process. This method succeeded in solving many challenging problems in diverse fields, such as robostics, transportation, medicine, and finance. Many RL methods are considered by the classic textbook Reinforcement Learning: An Introduction by Richard S. Sutton and Andrew G. Barto (We are translating its latest version into Chinese!).

Roughly speaking, the value (function) based reinforcement learning is a large category of RL methods which take advantage of the Bellman equation and approximate the value function to find the optimal policy, such as SARSA and Q-Learning. By contrast, the policy-based reinforcement learning methods directly optimize the quantity of total reward, e.g. REINFORCE, which are more stable but less sample efficient than value-based methods.

Proposition 2. The contraction and monotonicity properties hold for Bellman evaluation operator \(\mathcal T_{\pi}\) for any stationary policy \(\pi \in \Pi\).

As the discussion above indicates, if the model is known, one can design an policy optimization algorithm by generating \(\mathcal T v, \mathcal T^2 v, \dots\) which converges to \(v^*\) and then extracting the corresponding optimal policy. This is exactly the value iteration (VI) method. This algorithm simply starts with any value function guess and repeatedly apply the Bellman optimality operator on it to obtain the optimal value function. Sometimes VI method may be implementable only by approximation, e.g., when the state space \(S\) is extremely large or when the value function is updated by some constant step size. A common solution is depicted as the following approximate value iteration algorithm.

The VI method is a direct creation based on the fact that the Bellman optimality operator \(\mathcal T\) is a contraction. However, people may think by involving policy evaluation each step one can have a better rate of convergence and a better approximation of optimal policy, though it will incur more calculation each iteration. This is plausible, but not insignificantly so in theory. The approximate policy iteration (PI) algorithm is stated as follows:

In the last two section we explained how we do classical model based planing for MDPs from the topological point of view. Many readers by now have a sense that how this stuff and value-based reinforcement learning are connected. But there remains a critical question: Can this explanation is still suitable for those general model free cases? Can we explain those classical reinforcement “learning” algorithm, such as Q-learning, in an analog way?

Intuitively, the answer should be “yes”. Consider the evaluation operator \(\mathcal T_{\pi}\) and optimality operator \(\mathcal T\) defined by \[ (\mathcal T_{\pi} q)(s, a) := R(s, a) + \gamma\mathbb E_{\mathcal P, \pi} q(s’, a’) \] and \[ (\mathcal T q)(s, a) := R(s, a) + \gamma\mathbb E_{\mathcal P} \max_{a’\in A} q(s’, a’) \] respectively, over the Q value function space \(\mathbb R^{S\times A}\), with the similar metric as that of \(V\). Following the similar analysis, the contraction and the monotonicity properties hold for them. However, since the model is unknown, we cannot update the Q value function as that in value iteration. We can only approximate and update the Q value for some certain pair \((s, a)\) by sampling or temporal difference method each iteration. Is its convergence still guaranteed? The following theorem resolves our doubts.

In this example, the value space consists of all the “value distribution” \(Z(s, a)\). The value metric of the value space is defined by \(d(Z_1, Z_2):= \sup_{s, a}d_{w}(Z_1(s,a), Z_2(s,a))\), where \(d_{w}\) is the Wasserstein distance between two random variables. The evaluation operator is defined by \[ \mathcal T_{\pi} Z(s, a) \stackrel{D}{:=} R(s, a) + \gamma P^{\pi}Z(s, a), \] which is proved to be a contraction in \((\mathcal Z, d)\), where “\(\stackrel{D}{=}\)” means random variables on both sides are drawn from the same distribution. The monotonicity property also holds as they define the order as the order of the magnitude of expectation (\(Z_1 \leq Z_2 \Leftrightarrow \mathbb E Z_1 \leq \mathbb E Z_2\)). The optimality operator is defined by \(\mathcal T Z := \sup_{\pi}\mathcal T_{\pi}Z\). However, since the relative order is incompatible with the metric, this optimality operator is NOT a contraction in \((\mathcal Z, d)\). They use approximate asynchronous value iteration as the updating scheme, where the value distribution function is approximated by a neural network which outputs a discrete distribution between \([V_\text{MAX}, V_\text{MIN}]\).

Another example which might be helpful for us to understand this methodology is the multi-objective reinforcement learning. And this is also an interesting topic I am recently working on. The value space of this problem should be some multi-dimensional value function. The metric can be extended from that of a normed vector space. If we only want to find one policy resulting a Pareto optimal return, or simply want to find the best policy maximizing the return associated with specific weights, the evaluation operator and the optimality operator are very similar to \(R + \gamma P^{\pi}V\) and \(\sup_{\pi} \{R + \gamma P^{\pi}V\}\) (the \(\sup\{\cdot\}\) is defined by Pareto domination and the order of magnitude of weighted sum, respectively). Designing an updating scheme according to the real problem, we are guaranteed to have a viable algorithm. If we want to find all the policies resulting in a Pareto optimal return, or make the policies controllable, how to represent a collection of policies and write down the corresponding evaluation/optimality operator are very challenging.

In this article, some topological backgrounds of metric spaces and the Banach fixed-point theorem are first introduced. Based on these mathematical foundations, we investigate the contractive dynamic programming, where the contraction property and the monotonicity property together guarantee a unique optimal solution can be achieved exponentially fast. Bring these ideas to the reinforcement learning context, we can explain and analyze value iteration, policy iteration and Q-learning algorithms in a unified framework. It further inspires us to develope a methodology for developing iterative value-based reinforcement algorithm, which requires us to consider value space, value metric, evaluation operator, optimality operator and updating scheme.

The next time someone asks, “how does a value-based RL algorithm converge?”, or “how do people come up with a new RL algorithm?”, we can answer him not first by complex, detailed mathematical deduction, but simply by drawing an intuitive picture and analyzing on those accessible abstractions! Our journey on the topic of topological explanation of value-based reinforcement learning comes to an end here. Hope you enjoyed it!